A lot of people get their frozen yogurt fix from frozen yogurt shops, affectionately known as ‘froyo shops,’ whether heading to a mom ‘n pop store or a chain store like the eponymous FroYo.

But, what if you don’t live nearby such a shop? And, what if you’d rather save money? Well, you don’t have to keep heading to a froyo shop just to get frozen yogurt. You can make it yourself!

So, whether you get a specifically labeled ‘frozen yogurt machine’ or an electric ice cream maker, know that both appliances are capable of producing tasty frozen yogurt.

You can use a maker to make as much tasty frozen yogurt as you want, using any type of recipe you want. It’s pretty easy to get started using one of these machines; after all, they’re designed that way. 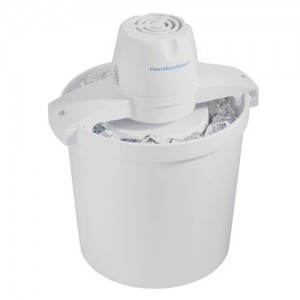 Even though the Hamilton Beach 68330 is labeled as an ice cream maker, this appliance is also great for making frozen yogurt. This ‘frozen yogurt machine’ also comes with a recipe book that contains ice cream and frozen yogurt recipes, too.

You can make up to 4 quarts of frozen yogurt in about 40 minutes, depending on your recipe. Simpler recipes, such as your standard vanilla, will take less than 30 minutes.

It also has an Easy-Lock lid to prevent spills and is pretty small, so you can keep out on your counter top during the summer (or all year round, really). For its inexpensive price, you can’t go wrong with this frozen yogurt maker. 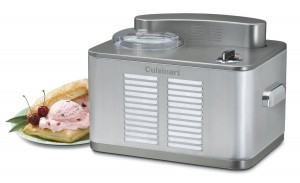 Here’s another ice cream maker that doubles as a great frozen yogurt maker. The Cuisinart ICE-50BC is higher end, so it will cost a few hundred to buy (that also goes for the newer model, too).

This frozen yogurt machine is made from stainless steel, and features a built-in compressor freezer, so you don’t really need to pre-freeze its bowl. This machine pretty much lets you ‘set it and forget it.’ You just need to add in your frozen yogurt mix and let it go.

The machine makes as much as 1 1/2 quarts of frozen yogurt at a time, so you will have to fire up the machine more than once if you’re planning on making a lot for more than 2 people. It has a timer to let you know when the frozen yogurt is done, too.

People actually don’t mind paying the extra money for this frozen yogurt machine. It makes excellent quality frozen yogurt, even though it takes a bit longer to make a lot at one time. 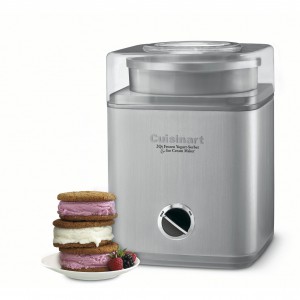 Read the full review of the Cuisinart ICE 30BC here!

Another Cuisinart ice cream maker that can also produce frozen yogurt. The Cuisinart ICE-30BC is priced much lower than its expensive counterpart, the Supreme. So, for a little over $100, this frozen yogurt machine is probably the best compromise for people who want a good durable machine at a better price.

You can make as much as 2 quarts in this machine. It also takes less time to produce it than with other models: less than 30 minutes, at that. It’s also pretty compact, so you can easily keep this on a counter top on a regular basis.

Some might consider this machine to produce frozen yogurt at a softer consistency than they prefer, but it’s good enough for most customers, as evidenced by their glowing reviews.

This maker and other similar barrel ice cream makers make up to 4 quarts of frozen yogurt at a time. Some, like the Aroma, have automatic ice cream churning controls, but you can easily keep them off and use the hand crank if you want to have traditionally made frozen yogurt.

This maker is great for people who want to experience how fun it is to make their own frozen yogurt. Although it’s not for everyone, it’s a great option to have on the market.