Greek yogurt is one of today’s hottest culinary trends. Once considered somewhat exotic, Greek yogurt is finding its way into more health-conscious diets and everyday recipes than ever before.

Regular yogurt is a very healthful food, loaded with calcium and live bacterial cultures, but low in calories. Yogurt’s versatility, and its ability to be mixed with myriad flavorings, makes it a favorite at either mealtime or snacktime. Greek yogurt takes regular yogurt’s tastiness and health benefits up a notch, and its popularity is making Greek yogurt makers like the Euro Cuisine GY50 a must for any kitchen that want to add this healthy food to meals and snacks. 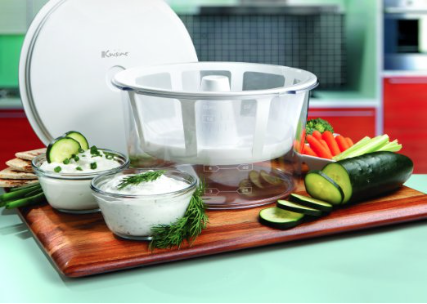 Greek yogurt is essentially regular yogurt that’s been strained thoroughly through a very fine mesh filter. This straining process removes a great deal of the lactose, sugar, and liquid whey that regular yogurt contains, and this gives Greek yogurt a much thicker consistency, nearly as firm as some cheeses. This delivers up to twice the protein in a serving that contains the same amount of calories as regular yogurt. The process also filters out sugar, and along with calorie reduction, prompts dieters and the health conscious to rave about the benefits of eating Greek yogurt. The finished product has a thicker, drier consistency that many people prefer to regular yogurt, and retains a somewhat sour tang that makes yogurt a favorite.

The Euro Cuisine Greek yogurt maker is a very simple device. It doesn’t require any power in order to work. It relies on a large strainer that fits inside a lidded container to produce up to two quarts of Greek yogurt per batch. The filter required to produce Greek yogurt from regular yogurt has to be very fine. Traditionally, Greek yogurt, sometimes called strained yogurt, labneh, Turkish yogurt, or yogurt cheese, is filtered through cheesecloth, muslin, or a paper bag to achieve its consistency. The Euro Cuisine GY50 makes for a much neater operation, and while the filter is contains is delicate, if you wash it out carefully it can be expected to last for many batches, unlike throwaway filters.

The three-piece GY50 has a lid that goes over the filter and the container that allows you to put the yogurt mixture in the refrigerator and leave it for hours without picking up a stale taste. The GY50 also comes with a recipe book that includes instructions for preparing healthy and tasteful dips and spread, like Tzatziki, berry-flavored desserts, and even naturally lo-cal salad dressings. 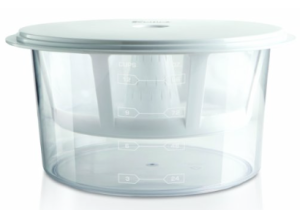 The Euro Cuisine GY50 is very reasonably priced, and is a best seller. The GY50 gets great reviews from both magazine reviewers as well as satisfied users. The Euro Cuisine receives four star or better reviews from a remarkable 90 percent of buyers, with almost 80 percent awarding it full five stars.

While users overwhelmingly sing the praises of this little device, they do caution other that the very fine filter that the GY50 uses to strain regular yogurt into Greek yogurt is delicate, and prone to split or break if subjected to rough use during the straining and emptying process, or while it’s being cleaned. Some users overlooked the instructions that advised them not to use metal utensils when scraping out the filter, but many people that had a problem with premature degradation of the filter assembly reported that they were supplied with a replacement from the manufacturer at no charge. Users also cautioned that care was recommended when cleaning the filter to avoid damage as well.

To find the best yogurt makers (to make yogurt out of milk etc), go back to the homepage or click straight to Cuisinart CYM-100 yogurt maker or the Dash yogurt maker which are the most popular models.

To find recipes to make your own homemade yogurt, click here to see our recor here.

Dash has introduced Greek yogurt maker recently. Dash is made by Storebound based out of NYC. The technology in this machine is patented.

END_OF_DOCUMENT_TOKEN_TO_BE_REPLACED

Yogourmet yogurt makers are made by VMC Products for Health Inc which started in 1969. They manufactured their first electric yogurt maker in 1970.