For many people, Greek yogurt is an integral part of their everyday meal plan, and a reliable home yogurt maker has become one of the most important small appliances in their kitchen. Creating authentic Greek yogurt at home can enrich the user’s life by offering fresh-tasting yogurt while saving money on the cost of buying it at a grocery store. Greek yogurt is a food that can be included in almost any recipe that calls for yogurt, so for many Greek yogurt enthusiasts, a constant supply of yogurt is necessary to maintain their daily diet. The Mykonos yogurt maker includes everything that you’ll need to make large batches of Greek yogurt, without breaking the bank on buying the unit. 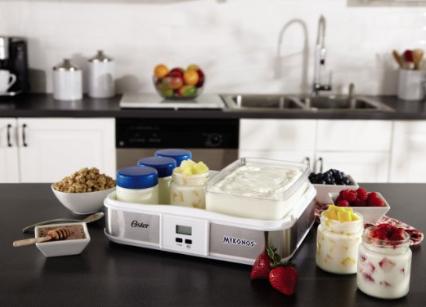 The Mykonos yogurt maker can be used with any type of milk, so vegan dieters will be happy to hear that you can use the device to make yogurt from soy and other dairy free milk. Greek yogurt is also a great source of daily vitamins and minerals for the lactose intolerant. Greek yogurt has twice the protein value of regular yogurt with only half the calories, which makes it is an excellent addition to any meal. The Oster Mykonos can be used to produce any type of yogurt, not just Greek yogurt. Yogurt is an excellent source of probiotics and can help improve your digestive health. Many health enthusiasts eat Greek yogurt with their breakfast, lunch, and dinner, so for them a home yogurt machine like the CKSTYM1012 is essential.

The Mykonos Greek Yogurt Maker allows the user to completely customize the method they use to prepare yogurt that suits their diet and taste preferences. The device’s main function is to produce Greek yogurt, but any variant of yogurt can be made using the Mykonos. The user can add extras to the fermenting yogurt by simply removing the cap from the fermenting jars and inserting the ingredients. From there the unique flavors will ferment into the yogurt, giving it a unique flavor and texture.

The device is very versatile, and it can create anything from a single serving of yogurt to a huge 32-ounce batch. The large batch size is also convenient for preparing brunch parfaits and healthy deserts to serve to large gatherings. On the other hand, you can prepare individual six-ounce jars of yogurt for quick meals, or a snack that you can grab on the go.

You can make Greek yogurt in three simple steps using the Mykonos. First, mix the milk and starter cultures together and then pour the mixture into the unit. Then set the correct fermenting time on the front of the machine and allow the device to cook for 10 to 12 hours. Then strain the contents and you’ll have a fresh batch of Greek yogurt. 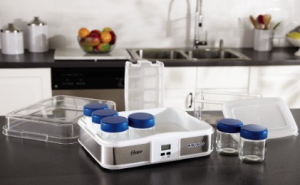 Users report that the Oster CKSTYM1012 Mykonos Greek Digital Yogurt Maker can quickly and easily produce a large batch of fresh yogurt at the push of a button. The device is very popular with online reviewers, and has an average score of four stars or higher on over 90 percent of all reviews. Users say that the device helps them to eat better by offering a healthy alternative to store-bought products and processed yogurts. They also say that they’re amazed at how much money they save by making their own yogurt instead of purchasing it at the grocery store. The Oster Mykonos is easy to use and affordable, and regular users of the unit will recoup the money they spend on the yogurt maker with the savings they enjoy on the finished product.